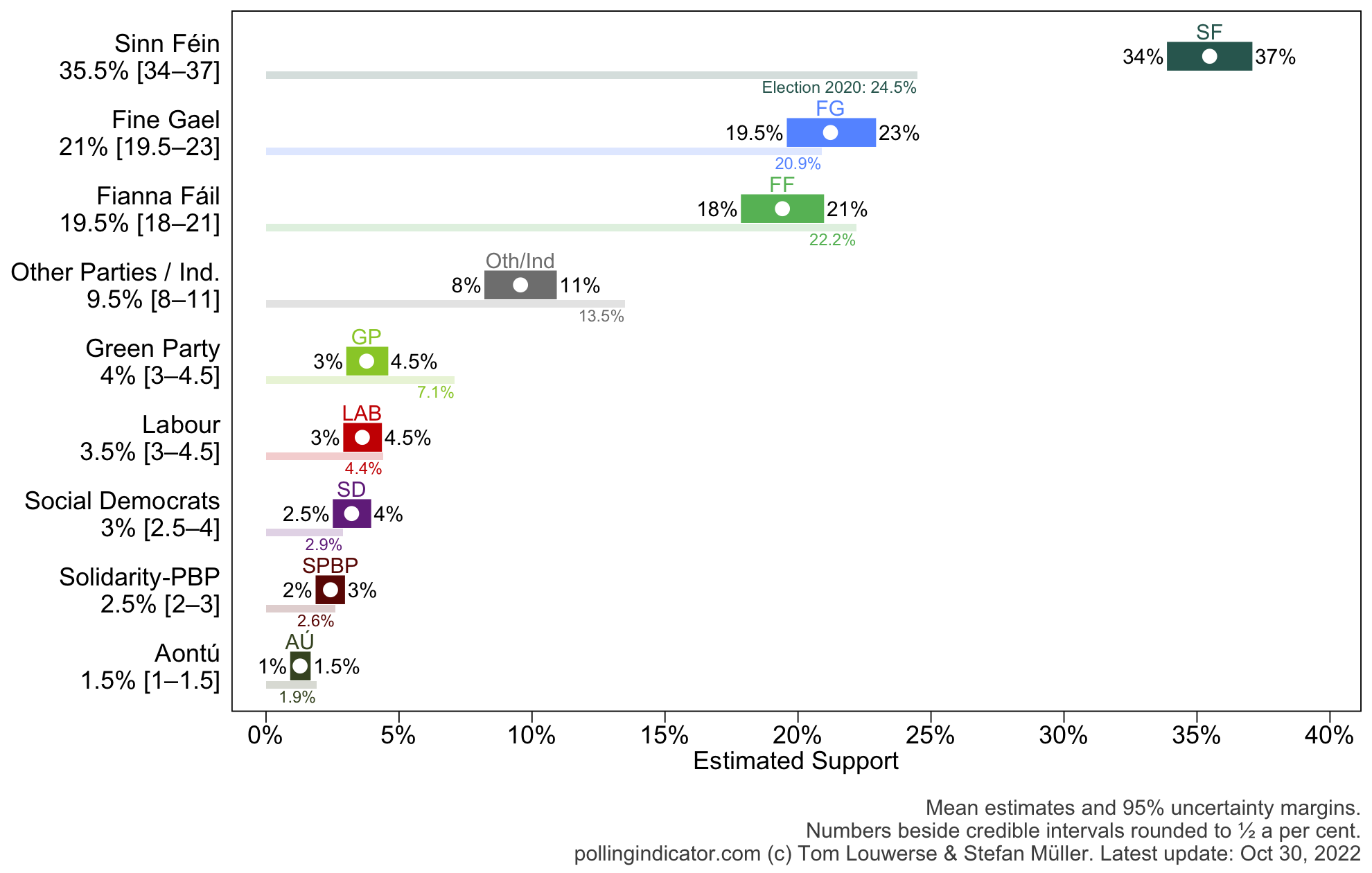 The RedC poll published on Sunday marks the 30th opinion poll on party support released in 2022. Despite mentions of “bounces”, “rebounds”, and “recoveries”, we observe very little change in aggregated party support this year. Sampling variation might drive most of these “changes”, which have usually been within the margin of error of ±3 percentage points. Research by Erik Gahner Larsen and Zoltán Fazekas shows that news reports frequently interpret deviations within the margin of error as substantive changes. The authors conclude that “a horserace coverage of polls about change can rest on a foundation of stability” (Larsen and Fazekas 2020: 115). Irish newspapers often do not seem to deviate from this pattern. However, and this is very encouraging, most news articles now explicitly mention the margin of error, sampling strategy, and weighting of respondents.

The Irish Polling Indicator suggests remarkable consistency in party support this year. The figure below shows the Polling Indicator estimates for the three main political parties: Sinn Féin, Fine Gael, and Fianna Fáil. For all three parties, the lines are more or less flat. The geopolitical and domestic events in 2022, including Russia’s invasion of Ukraine, the housing crisis, rising interest rates, and a record-breaking budget package, did not seem to correlate with substantive changes in support for Irish parties. We should therefore take headlines about rebounds and recoveries with a pinch of salt.

Survey questions on most important political issues, attitudes towrads current events, or analyses across age groups and rural and urban regions may be more relevant to understand Irish voters than minor fluctuations in first-preference vote intentions. For instance, a recent Ireland Thinks poll concluded that over half of all non-homeowners would vote for Sinn Féin, and 75% of non-homeowners would vote for left parties. The Irish Demographic Polling Data, a new collection of data from over 100 surveys for various subsamples, such as age groups, gender, and social class, can help us map relevant changes in the Irish electorate. The graph below, for example, shows the popularity of support for Sinn Féin across age groups. Currently, Sinn Féin is by far the most popular party among voters aged 18-54, while the three major parties enjoy similar levels of support among voters aged 55 and over.