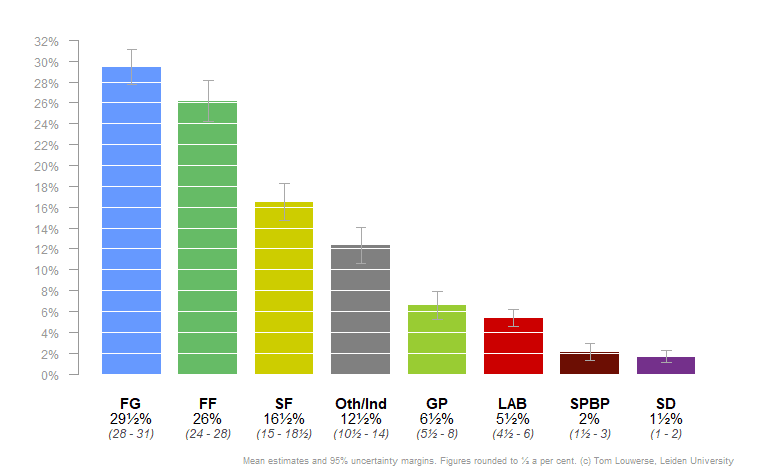 This is a long overdue update of the Irish Polling Indicator, which I had not updated since the end of 2017. This new update includes all polls published since then and also adds the polls of Ireland Thinks. The other pollsters included in the model are Behaviour & Attitudes, Ipsos MRBI, Millward Brown and Red C Research. Because not all pollsters publish figures on all minor parties, I now report one category of Others/Independents (including Independent Alliance). Votes for Independent candidates form the bulk of this category.

Overall, we see that Fine Gael (estimated support between 28 and 31 per cent) is very narrowly ahead of Fianna Fáil (between 24 and 28 per cent). But again, this was the situation around mid-December 2019, so this might very well have changed or still change during the election campaign for the 2020 general election. Sinn Féin is on 15 to 18.5 per cent, but here we see particularly large differences between pollsters (Red C: 11%, B&A: 20%). A category of Independents (including IA) and others is on between 10.5 per cent and 14 percent.

The Green Party, which saw a strong increase in support around the European Parliament elections in May last year, is now estimated on 5.5 to 8 percent. The Labour party has been very stable in polls over the last few years, and currently still showing 4.5 to 6 per cent. Solidarity-PBP and Social Democrats are on a couple of percentage points each.

The method used for combining the polls is explained here