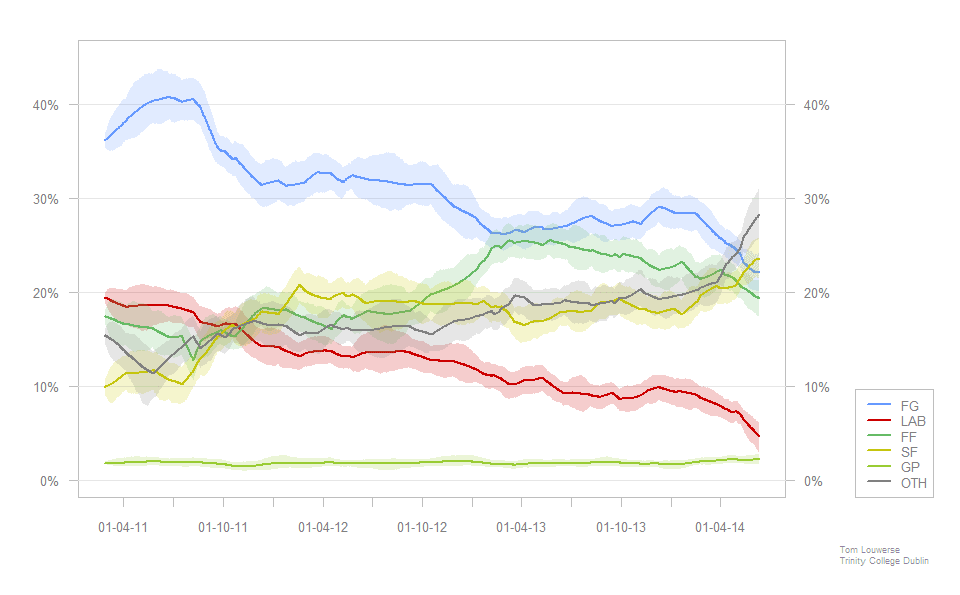 Independents and smaller parties have seen their electoral support increased over the last two months. They now top the Irish Polling Indicator, which combines all national election polls in to one estimate of party support. Independents now score between 25.7% and 31%, followed by Sinn Féin at 21.5-25.7% and Fine Gael at 20.1%-24.2%. The largest government party has been on a downward slope in the polls since mid-February, while Sinn Féin have seen an increase in public support since the beginning of this year. These trends seem to continue after the May local and European elections.

No gains for Fianna Fáil

Labour remains the big looser, currently standing at 3 to 6.1%. This is an approximately 15 percentage point loss compared to the general election in 2011. While Fine Gael also lost 15 percentage points, for Labour it means that the party is now clearly in single digits.

Fianna Fáil seems to be struggling from the government parties’ losses. Currently at 17.4% to 21.2% it is polling barely better than the 2011 election result. The party has been in a downward spiral in terms of voting intentions for about a year. Whereas the local election result was generally welcomed by Fianna Fáil members, national voting intentions seem to be lagging behind.

Uncertainty The Irish Polling Indicator combines the polls of the four Irish pollsters, Behaviour & Attitudes, Ipsos MRBI, Millward Brown, and Red C. Party support is reported in terms of a bandwidth, emphasizing the uncertainty or error margin that is associated with public opinion research. This uncertainty margin needs to be taken into account in interpreting polls.

One example of how margins matter can be seen in the graph below. It displays the difference in support for Fine Gael and Sinn Féin over time. At the 2011 election, Fine Gael was much larger than Sinn Féin (about 25 percentage points), but this difference has declined over time. A large part of the decline was in the first year; in the last six months the gap between the two parties has narrowed further. Currently, Sinn Féin seems actually a bit ahead of Fine Gael, but because the error margin includes zero, we cannot draw any definite conclusions. The parties are so close in the polls that we cannot say, based on the available data, which one is currently bigger.

The Irish Polling Indicator website allows everyone to explore the trends in the polls. Are parties winning or losing? Is Labour still bigger than the Green Party? Do some pollsters estimate certain parties structurally higher than other pollsters? The tools on the website allow users to explore these questions.